How Quickly Can Germs Spread?

Germs spread rapidly in office and classroom settings, particularly where low-quality indoor air and surface hygiene combine with employees and students coming in sick and contagious. 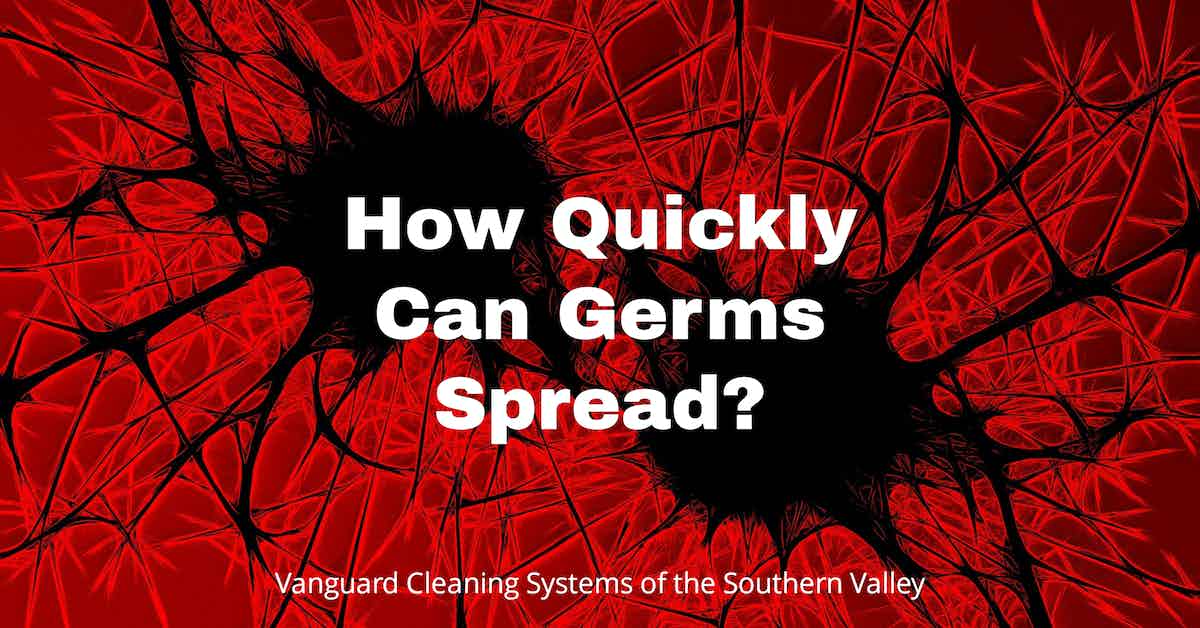 How Are Germs Spread?

Germs in office and classroom environments typically spread in one of two ways: surface contact or air.

In many public facilities, surface hygiene is frequently insufficient to prevent rampant illness transmission between occupants.

Recently, research was conducted by the University of Arizona to determine how rapidly germs could spread in a public building.

[...] we targeted an office building of 80 people and we asked 10 of those people to volunteer to be “artificially inoculated” with a surrogate virus.

These are viruses we know infect bacteria — not infect humans — but they have very similar survival and spread tendencies as influenza and other viruses that we know cause disease in humans.

And so we put droplets of water on their hands, and one of those drops of water, unbeknownst to the participant, had this surrogate virus present in the droplet.

The level of virus in that droplet simulated what you’d expect on a person’s hands if they were sick.

We then asked them to go about their workday. And by noon — four hours into the workday — we went and swabbed commonly used surfaces in that office building and sampled the hands of all the coworkers.

Half of those surfaces and half of the hands of the coworkers tested positive for the virus that we planted.

How Quickly Do Germs Spread in the Office?

The High Cost of Presenteeism

Presenteeism is a condition defined as a worker or student being present and accounted for, but unable to perform at a desirable level due to physical or mental health issues.

Presenteeism commonly results in increased germ transmission and measurable drops in productivity, costing the U.S. economy hundreds of billions of dollars annually--an estimate well over the cost of occupant absenteeism.

[A] large portion of the presenteeism costs is related to individuals dealing with chronic and long-term medical conditions.

One of the most significant revelations is that presenteeism may cost companies more than medical treatment and drugs.

It may cost employers two to three times more than direct medical care via insurance premiums and employee claims.

Moreover, compared to absenteeism, less time and money is lost when employees stay home than when they show up to work and underperform.

The Costs of Presenteeism and Absenteeism in the Workplace

The logic and reasoning behind occupant presenteeism remain elusive.

Recently, a study conducted by the American Journal of Infection Control sought to assess a recent incident involving a Japanese healthcare worker who came into the office sick and infected a reported 17 patients, costing the institution approximately $12K in additional medical expenses.

According to results from the study;

[...] many issues can contribute to employees’ presenteeism, including concerns about lost income, lack of days off, burdening colleagues, and maintaining professionalism.

Given the wide-ranging reasons for occupant presenteeism, confronting it directly to prevent the transmission of disease is a long-term target unlikely to produce the kinds of results needed immediately--protecting the health and safety of other occupants.

To address that challenge, ongoing enhanced cleaning methods should be employed to remove contagious germs and bacteria from surfaces to prevent them from spreading through the air or to facility occupants, including:

Presenteeism is an enormous multi-faceted healthcare issue that costs the U.S. economy more than $150B annually.

While there is no clear cause, the outcome is often detrimental to the productivity of the classroom or workplace, and the health and safety of its occupants.

Maintaining stringent clean for health standards will significantly reduce the impact of presenteeism on the health of other facility occupants.

Outsourcing is a proven method for onboarding highly in-demand cleaning and disinfection services and experience for a fraction of the price of maintaining a similar service in-house.